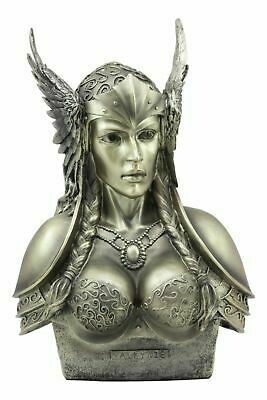 Frigg or Frigga (which means ‘Beloved’ in Old Norse) is a goddess found in Norse mythology. As the wife of Odin and the mother of Baldur, she is the ‘Queen of the Æsir’. This deity was worshipped as a sky goddess and is believed to be responsible for weaving the clouds. Additionally, the Norse believed that she had the power of prophecy and was in charge of weaving the fates. Love and marriage were also in the domain of this powerful goddess . As an interesting side, the English weekday name ‘Friday’ is etymologically derived from the name of this goddess.

Although possibly the most important goddess of the Æsir, little is said about her in the surviving primary sources on Norse mythology . Moreover, she is not an entirely unique goddess, as she shares a number of attributes with Freya, a goddess of the Vanir. Both, for example, are associated with love and marriage. Both are also speculated to have evolved from an earlier Germanic goddess known as Frija.

Frigg is the wife of the major god Odin and dwells in the wetland halls of Fensalir, is famous for her foreknowledge, is associated with the goddesses Fulla, Lofn, Hlín, and Gná, and is ambiguously associated with the Earth, otherwise personified as an apparently separate entity Jörð (Old Norse "Earth").

Frigg wears many hats in Norse mythology. She is often described as “foremost among the goddesses,” and was the wife of Odin. She was the Queen of the Aesir and the goddess of the sky. She was also known as the goddess of fertility, household, motherhood, love, marriage, and domestic arts.

In Norse mythology, Valkyries were originally sinister spirits that would fly above the battlefield in search of the dead, deciding the fate of the fallen for Odin. The word “Valkyrie” means “chooser of the slain,” and once chosen the warriors would be flown by the Valkyries over Bifrost, the rainbow bridge, and on to Valhalla. Valhalla was the heavenly home of Odin’s fallen army, and hall of those who had died heroically in battle.

However, later in Norse mythology the Valkyries were more romanticized, they became Odin’s shield-maidens, virgins with golden hair, who served the heroes meat and drink in the halls of Valhalla. The act of serving meat to those in Valhalla was not seen as a servile task, but rather quite the opposite. In Norse culture, queens would personally serve particularly revered guests as a sign of respect. On the battlefield, they were transformed into swan-maidens. These maidens were at risk of being trapped on earth if they were seen without their plumage.