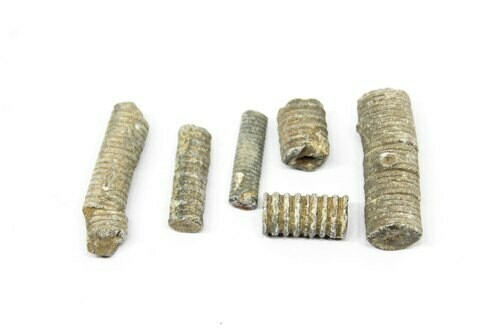 Crinoids are marine animals that make up the class Crinoidea of the echinoderms (phylum Echinodermata). The name comes from the Greek word krinon, "a lily", and eidos, "form". They live in both shallow water and in depths as great as 9,000 meters (30,000 ft).Those crinoids which in their adult form are attached to the sea bottom by a stalk are commonly called sea lilies.

A spiritual stone, deeply connected to the earth, home and the events of one's past. A survival stone, one of strength and protection. Ancient life held within its form lends the power of wisdom and healing. These fossils of Crinoids were found estimated around 245 -570 million years ago. Crinoids’ fossil is utilized to treat the primary causes of in firmity as well as used to mend the troubles related to mental depression, stress. These fossils are further utilized to mitigate sexual disruptions in both sexes. They are further known to relieve the body of toxins and are believed to be good for the skin. They are too known to kindle the immune also to the nervous systems which in turn helps in the assimilation of oxygen in the brain for a vigorous circulatory system. On a physical level, it too augments the mental function of its carrier by recuperating concentration, perception, and analytical abilities. They are also considered to be beneficial for the eyes along with the stomach as well as skin. These further whispered to be good at heart, lymph system and blood vessels. They are moreover considered to be highly restorative for tissue deterioration. These fossils are further supposed to stabilize the nutritional absorption of vitamins and minerals.

They are furthermore known to hearten the contemplation of their carrier’s life experiences that lead to spiritual growth and inner stability. These fossils with a high grounding eminence are said to be good to solve the meditative purpose and, on the other hand, allow access to ancient wisdom. They are ideal for reframing and transmuting any past misuse of spiritual power, moreover teach the sensible use of power and will. They further help to align the energies of his torso with the energies of the divine. They moreover serve their carrier to match the divine frequencies of the cosmic world with the frequencies of the self or chakras. They are known to teach the lesson of reciprocity, “As we sow thou we reap”. They help the carrier to patent a joyous life by calculatedly prognostic well into the reality around. They are further known to unfold the levels of the subconscious mind to know the truth and attain spirituality. They are moreover known to express self.